Discussion between Gregor Sailer and Pascal Beausse, critic and curator

Gregor Sailer’s The Potemkin Village series makes very sophisticated play on a kind of double deception. The “Potemkin villages” the artist identified over the course of two years all across the northern hemisphere, whether in France, Germany, England, Russia, China or the United States, are very often photographed in elevation, one of the characteristics of the documentary style as so well defined by Olivier Lugon in his book Le style documentaire. That style – a description of the tangible world – can for example reveal the social structures that govern us through the architecture; but it is above all motivated by the ambition to articulate certain truths about the relationships of strength in our societies. But the thing is that almost all the façades shown in this exhibition are false. They make us think of uses the purposes of which the buildings totally fail to fulfil.

Thus a French village suggesting “peaceful strength” basically has nothing idyllic about it, any more than the centre of a new postmodern town in France. Both views have in fact come from the French army’s military training sites (the Centre d’entraînement aux actions en zone urbaine [Training Centre for Interventions in Urban Areas – CENZUB] in the Aisne at Sissonne), just like the 24 oriental-style villages located 10,000 km away from the Mediterranean in the Mojave desert in California, built by the United States for the purpose of training their troops for war in Iraq, Afghanistan, Syria and elsewhere (Fort Irwin National Training Center).

As for the little Scandinavian-looking houses, they are not home to anyone either; their façades have only been put up to simulate a village dealing with road safety in Sweden (Carson City and AstaZero). Nor has the façade of the large office block ever existed either; it is just a tarpaulin on which the semblance of the façade of an administrative building has been printed, suspended among other ones on the streets of Suzdal, the town where President Putin welcomed the BRICS leaders and other diplomats in 2015. But as the host town wasn’t really presentable, “Potemkin villages” were set up in snowy landscapes to make a good impression, just like the ones Field Marshal Grigory Aleksandrovitch Potemkin – according to legend – had installed in the Crimean countryside when Tsarina Catherine II travelled there in 1787.

All these façades photographed by Gregor Sailer could very well have featured in the fALSEfAKES exhibition the Centre de la photographie Genève staged in 2013. Nowadays it is in fact common to be extremely wary of the possible doctoring of photographic documents in the era of digitalisation; yet nobody makes the connection with the observation that a good part of our built environment is already fake, whether it is a question of the interiors of buildings or entire towns – such as the Val d’Europe built near Eurodisney to reflect Haussmann’s Paris, for example. This is the world Gregor Sailer is talking about, particularly in his series of Chinese towns; built on the principle of imitation, they look like certain German or English towns: Thames Town for example, on the banks of the Yangtze, near Shanghai.

These shots taken in winter to obtain a diffused light and with a camera to achieve a perfect rendering have been collected in a book of the same name, published by Kehrer Verlag in 2017.

The Potemkin Village exhibition, presented by the CPG as a world first at Les Rencontres d’Arles 2018,shows a selection from that book, and offers a double interpretation. The viewer is confronted by both wallpapers that reproduce façades, but also by small prints that reveal the reverse side of the décor, letting us see the context, still devoid of any human presence, apart from the Chinese tourist resorts. 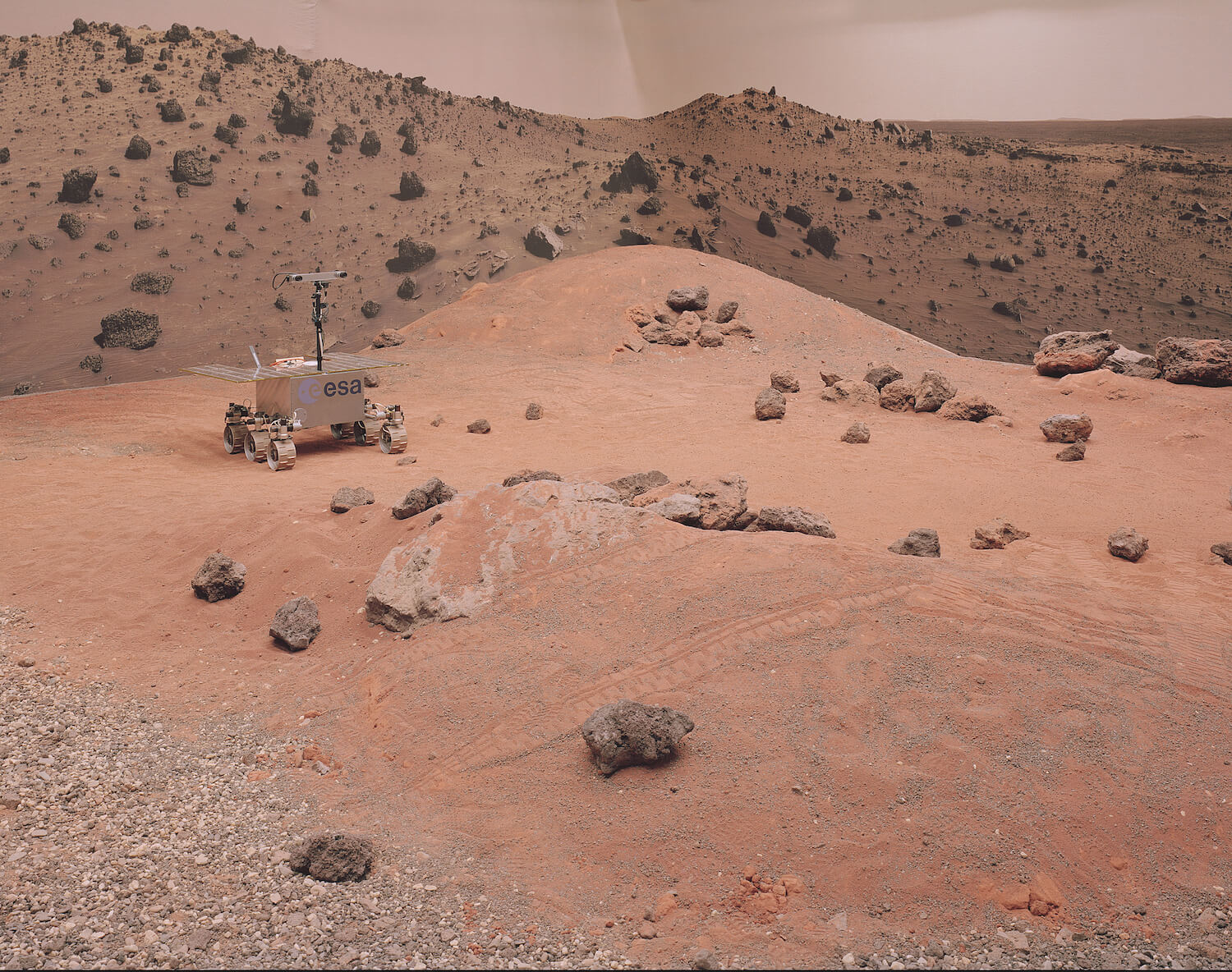 Gregor Sailer has a predilection for architecture and landscapes, preferably in forbidden zones, like his series Closed Cities. The CPG first worked with Sailer in the summer of 2018 on the occasion of the showing of The Potemkin Village at the Rencontres d’Arles festival, to which The New York Times,Libérationand Haaretz each devoted a full page. This exhibition of abandoned cities around the world subsequently travelled to the CPG in Febr [...]

Gregor Sailer has a predilection for architecture and landscapes, preferably in forbidden zones, like his series Closed Cities. The CPG first worked with Sailer in the summer of 2018 on the occasion of the showing of The Potemkin Village at the Rencontres d’Arles festival, to which The New York Times,Libérationand Haaretz each devoted a full page. This exhibition of abandoned cities around the world subsequently travelled to the CPG in February and March 2019. For OSMOSCOSMOS, Sailer presents images from The Mars Series made in theEuropean Space Agency’s Restricted Research Areas, where Martian landscapes were constructed for simulations in preparation forthe 2020 Mars Expedition.