Through the display of 24 photographs on the prestigious quai du Mont-Blanc, the artist Marcelo Brodsky’s work with the CPG on the public domain of the City of Geneva aims to draw attention to missing students of AYOTZINAA in 2014 in Mexico, during the October 2017 session of the Office of the United Nations High Commissioner for Human Rights, in partnership with the International Film Festival and Forum on Human Rights (FIFDH).

In 1984 Marcelo Brodsky (*1954, Buenos Aires) found a school photograph of his class among his family’s possessions in Buenos Aires when he returned from Barcelona where he had spent seven years in exile, on the run from the military dictatorship (1976 – 1984). On the photograph dating from 1967, the artist has made notes about his then school friends at the Collegio Nacional of Buenos Aires. the face of his best friend Martin is scored through, as are those of two other friends. They were seized and imprisoned by the military, as was his brother Fernando, reported definitively missing, like a further 30,000 argentinean citizens, or even more. That is the state crime the Buena Memoria series (presented at the Centre de la Photographie Genève in 2010 as part of the exhibition La revanche de l’archive photographique) conjures up from a school photograph, a series that brought the artist worldwide recognition. He is currently taking part in Biennale de Lyon.

Following the disappearance of 43 students from the AYOTINAPA rural teachers’ college who were going to Iguala to take part in a demonstration against the central mexican state in september 2014, Marcelo Brodsky launched an international appeal, primarily addressed to art schools, urging them to fight with a school photograph for the memory of the missing AYOTINAPA students. according to Wikipedia, the local police intercepted the students on their journey, and a confrontation ensued. The details of what happened remain hazy, but the official investigation concluded that once the students had been taken into custody they were handed over the “guerreros unidos”, a local mafia group, then killed. The final count was 27 injured, 6 dead, and 43 missing. That massacre which rapidly became a national scandal as it revealed the links between the local authorities and a death squad triggered a worldwide press campaign. 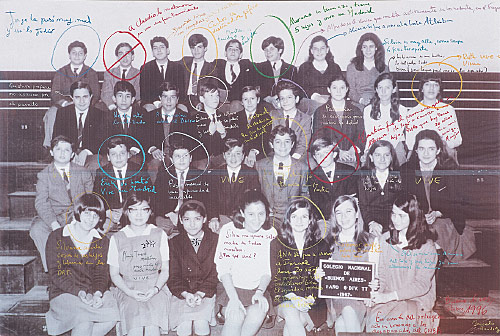