The Art & Public Gallery and the Geneva Photography Centre are presenting two solo exhibitions at the same time and for the first time in Europe: Zhang Wei, an artist born in Shang Luo in 1977 and living in Beijing.

While the Art & Public gallery will focus mainly on photographs from the Big Star series, showing the faces of celebrities such as Jackie Chan or Madonna, the CPG will focus its attention on portraits mainly of heads of state, mostly authoritarian, even dictatorial. The Leaders, as the artist called his series, including Mao, Bush Jr., Kim Jong-il, Gaddafi and Putin, have in common, like the Big Stars, to be compositions - an expression to be taken at face value. They all consist of tiny fragments of portraits that the artist took of people he met on the street and photographed in his studio, then carefully mounted into a single face.

These "popular compositions", that is to say, these portraits made up with the pixilated "flesh" of the people, Chinese in this case, do not have the bitter taste of monuments erected to the glory of dictators by prisoners, or even political prisoners, in any case with the blood of the oppressed people, as may be the case with the Mao Mausoleum, for example, which also appears in Zhang Wei's horror cabinet. It is precisely all these small algorithmic units, transposed onto a screen, that configure the beard hair, eyelashes, eyes, lips or hair of a political leader, for example.

If so many small units taken from the people ultimately constitute the face of the leader dominating his people, it is amusing to note that in Zhang Wei's black and white process, the color of the skin is no longer a reference with Chinese citizens. He composes the faces of both Obama and Putin. This work of ants, a little similar to the exercise of the one who is supposed to count in the service of the Indian emperor Sheram of rice grains to reward Sissa Ben Daher, the inventor of the chess game, the artist goes one step further than the transformed bodies of the series "Black Notes". Because everything here is fake! And yet, the similarity with the models, i.e. with the two-dimensional reproductions of politicians on the global scene, is almost identical. But only almost - a little like the "look like" that artists like Matthieu Laurette or Alison Jackson have made such good fun of. These fully grafted figures remind us from near and far of the horns of the theatre of world politics.

We know them for an important part of television and other mass media and their infinite reproductions is equal to the omnipresence of movie actors and other pop stars such as Zhang Wei expose them in his Big Star series. Together (with the Portraits in profile of an unknown woman), they form the Artificial Theatre, as the artist calls this complex. This generic term may surprise by its pleonastic aspect, given that theatre is essentially artificial. But we are tempted to see in this title, a distinction from the baroque notion that Shakespeare, for example, used when he wrote "Life is a theatre". Indeed, these figures "seen on TV" and supposed to drown us in emotional baths - if they hold the scene of the so-called political or the scene of the so-called "Zenith" - they all share this semblance of playing theatre, because, as Guy Debord writes, "the show does not sing of men and their weapons, but of goods and their passions". In the artist's way, the photographs are hung in such a way that the viewer is in the field of the crossed glances of the powerful of the world. They look at each other in a face-to-face situation that makes our position as spectators uncomfortable, even more vulnerable. Artificial Theater, Politic Serie, The Leader could also have been included in the exhibition fALSEfAKES, shown in 2013 at the CPG as part of the triennial 50JPG, as exemplary pieces for the possible manipulations that "photoshop" offers us today. Nevertheless, these statesmen are also the screens of the lobbies who, for purely financial interests, still do not resolve to stem the massive destruction of the ozone layer and whose climate change damage is, in negative, visible on the large posters stuck to the wall in the previous room, designed by Ursula Mumenthaler. 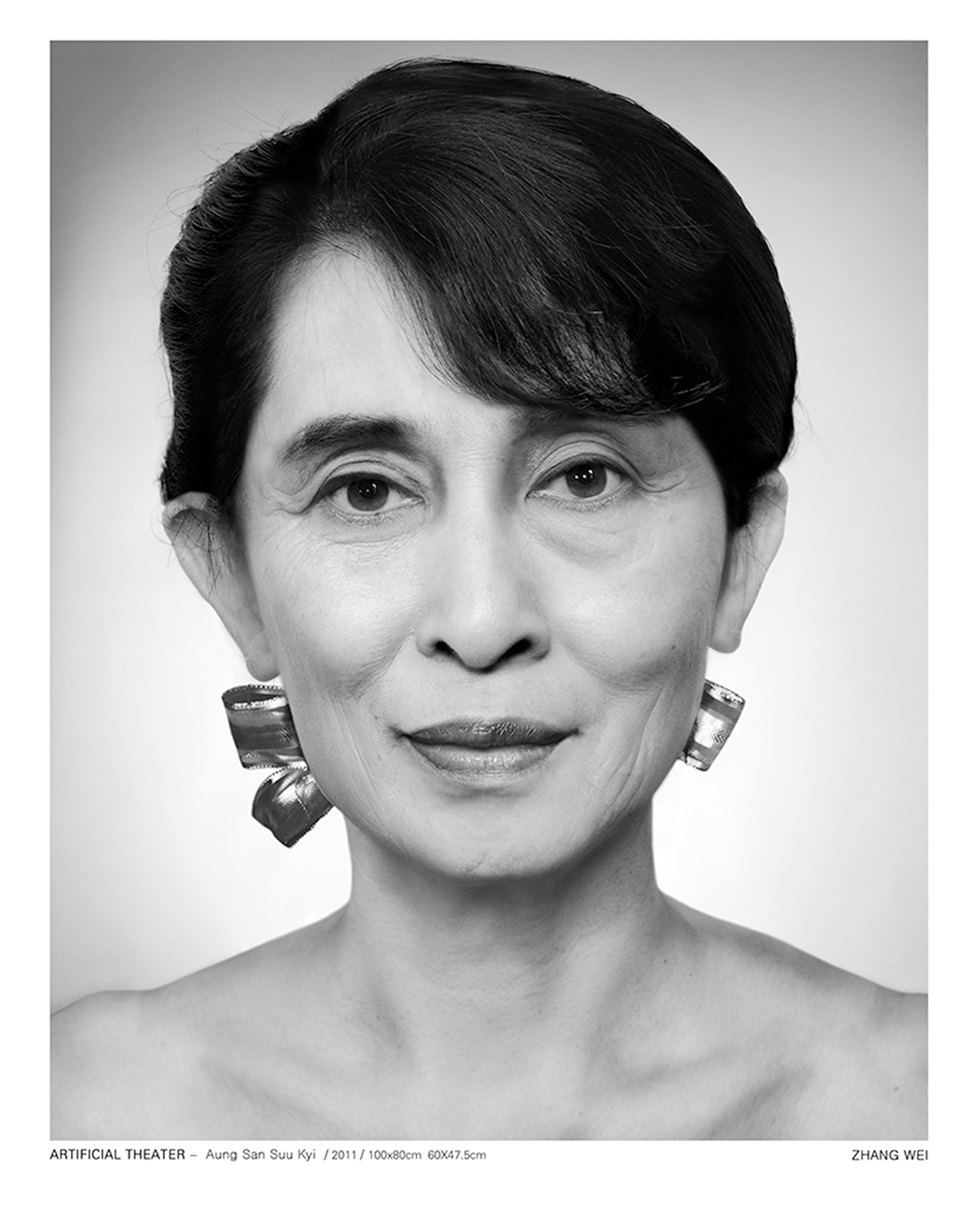 “Zhang Wei [was] once was a painter, but in recent years he has chosen photography. He is a creator of fictional images through photographs rather than a photographer. No matter how documentary the photos or videos are, they are not objective themselves, because the lens is full of limitations from machinery and human beings, and the productive technique of an image is just the substitute or the virtual image of the objective image after all. However, because photographic pictures are [...]

“Zhang Wei [was] once was a painter, but in recent years he has chosen photography. He is a creator of fictional images through photographs rather than a photographer. No matter how documentary the photos or videos are, they are not objective themselves, because the lens is full of limitations from machinery and human beings, and the productive technique of an image is just the substitute or the virtual image of the objective image after all. However, because photographic pictures are more close to objective images, they are more “real” than paintings, and also more convenient and efficient than paintings, Zhang Wei put down his brushes and picked up camera and mouse. The main reason motivating him should be his strong desire for expression, rather than his obsession with brush/paint, camera/film. Among painting/photography, filming/production, reality/ virtuality, normal/abnormal, Zhang Wei carefully adjusts his scale so these images maintain a moving tension. His artwork emits a different flavor. There is relaxation of games and playful pleasure, and also a mix of strong sadness, or despair.”