Since 1975, the Geneva-based photographers’ collective INTERFOTO has been covering a wide range of social and political events in Geneva and French-speaking Switzerland.

First as an agency for the union and activist press, then as a collective author of books, INTERFOTO has continued its commitment on the margins of the art world. The members of the team - there are currently 6 of them - sign the photographs, always in black and white, only by the name "Interfoto" and make them available to any organization, association, trade union or other group, mainly on the left, and this since its creation.

The exhibition "INTERFOTO 1975 - 2015" is the first institutional presentation of one of the most important visual memories in the field of activist image production, and not only in Switzerland. Invited to the CPG for the "Archival Affairs" symposium in November 2012, their intervention attracted the attention of the artistic and academic communities. The collective's work was first presented at the CPG in 2013 as part of the exhibition "RESEARCH APARTMENT". The exhibition "INTERFOTO 1975 - 2015" will attempt to highlight a tiny part of the INTERFOTO archive and take stock of 40 years of militant photographic activity.

Noting in the mid-1970s that the so-called "bourgeois" press (an expression of the time!) rarely, if ever, covered demonstrations, strikes, occupations and other struggles, ranging from workers' demands to the rights of women, foreigners and youth, some political activists took charge of this information work that had been absent until then.

All of them gave their free time to go to the places where rallies, protests and other political actions of solidarity took place, to spend hours in the darkroom and finally to distribute by post the prints taken from the baths and dryers. Walter Benjamin considered "the author as a producer". The formula of the most important thinker who theorized, based on his philosophy of history, photography in the 1930s, ideally applies to the rules that INTERFOTO has imposed on itself: not to privilege the author's photo (for a medium that sounds the end of the author), but on the contrary to rely on collective creation. Because INTERFOTO determines in a team the reports to be made and the photos to be distributed. And it is the same way that members share tasks without hierarchy or specialization.

INTERFOTO's photographs have made the headlines of the most diverse daily, weekly and monthly newspapers, ranging from "Courrier" to "Lutte Ouvrière" and "il lavoratore". The photographs coming out of the famous lab located in a basement of the Caves were also used to illustrate nearly 40 posters of different events. To give some figures: the INTERFOTO archives include 4,733 films containing about 141,990 24x36 black and white negatives; the agency has collaborated with about 80 newspapers over the past 40 years; it is estimated that 10,000 photos have been published; INTERFOTO images have been used to illustrate about 50 books (in addition to the nine books produced by the Agency). A more than impressive result!

Over the years, the agency's work has increasingly focused on producing images that do not necessarily reflect current events on a day-to-day basis. This is how the production of photo books has grown and INTERFOTO has begun to define itself as a collective. INTERFOTO now has nine publications, which show an interest in aspects of daily life that go beyond activism: work life, urban housing, public transport, etc.

These books and black and white print groups in the standard 30x40 cm format, which still appears today as a trademark of INTERFOTO, will set the pace for the past 40 years and lead the exhibition at the CPG. On the walls and in shop windows, in front of books and prints, the exhibition will also showcase some of the newspapers, posters, books, leaflets and other printed objects for which the editors and other publication managers have used the collective's archive.

The CPG's programming over the past 14 years has focused as much on contemporary questions of the "documentary style" as on militant image productions, or even both together. The CPG has addressed these issues in the past with, for example, Bruno Serralongue's "BACKDRAFT" or Philippe Durand's "OFFSHORE" exhibitions, and will continue to do so with the exhibition of Californian Fred Lonidier, which will follow INTERFOTO's in June 2015.

This policy has led to a deeper questioning of the notion of the archive. Let us only recall exhibitions such as "PHOTOGRAPHS OF ALGERIA" by Pierre Bourdieu, "ALL PHOTOGRAPHS OF A SINGLE PERSON" by Miriam Bäckström and Carsten Höller, "THE GOVERNMENT" by Hans-Peter Feldmann, "DOUBLE ECONOMIES" by Estelle Blaschke, Armin Linke and Doreen Mende and most recently "BELEGKONTROLLE" by Peter Piller. The large collective exhibition "LA REVANCHE DE L'ARCHIVE PHOTOGRAPHIQUE" in 2010 brought together more than 50 positions in a wide range of photographic production fields.

We are very happy today to be able to present in this dynamic the Geneva-based photographers' collective INTERFOTO and thus to celebrate a precious work that deserves greater recognition in the city of Geneva, and beyond its borders.

The INTERFOTO exhibition is supported by the Fonds cantonal d'art contemporain, DIP, Geneva, the Migros Culture Percentage and the City of Geneva. 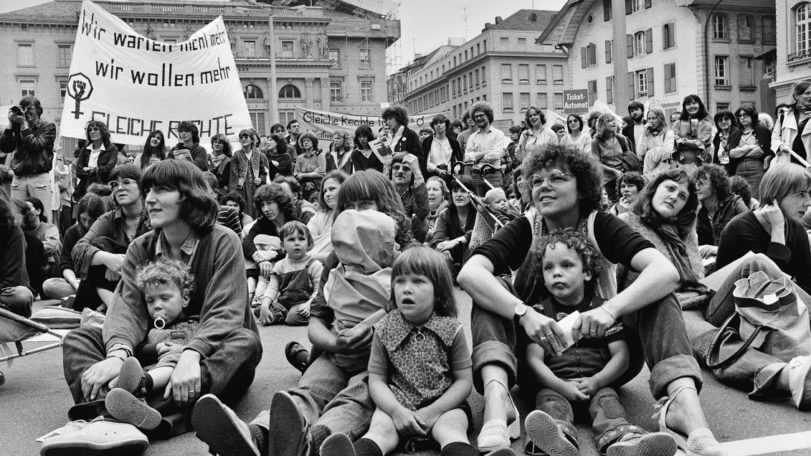 In 1975, four people politically involved on the left planned to create a photographic agency to provide images and posters related to the political movements of the time. Faced with the difficulty of being able to make a living from it, two people quickly left the group, but were quickly replaced by other photo enthusiasts. A militant photography agency was born: Interfoto, whose members were all activists in various capacities in organizations: trade unions, neighbourhood groups, solidarit [...]

In 1975, four people politically involved on the left planned to create a photographic agency to provide images and posters related to the political movements of the time. Faced with the difficulty of being able to make a living from it, two people quickly left the group, but were quickly replaced by other photo enthusiasts. A militant photography agency was born: Interfoto, whose members were all activists in various capacities in organizations: trade unions, neighbourhood groups, solidarity groups with immigrant workers, feminist and Third World movements. Left-wing movements whose objectives were to transform society. The personal involvement in these groups allowed Interfoto photographers to gain confidence with the struggling organizations during the shooting.

Interfoto photographers have chosen not to focus on author photography, but on the contrary on collective creation. Ideally, it is in teams that they determine the reports to be made, that they decide on the photos to be distributed, that they divide up the tasks without hierarchy or specialization. It is according to the availability of each one that they carry out the shooting, the laboratory work, the archiving and administration, the construction of exhibitions and books.