The exhibition Superficial Projects at the CPG is the first solo exhibition in French-speaking Switzerland of the work of Peter Tillessen (b. 1969 in Frankfurt, lives and works in Zurich).


Sunday January 22 at 3pm : Guided tour by Peter Tillessen and Joerg Bader, director of the CPG.

The exhibition is supported by the Sophie and Karl Binding Foundation, by the Volkart Foundation and by Arctic Paper.

This exhibition is also an opportunity for the artist to display work that falls outside the photographic genre, with which he has been associated up until now, and features drawings, sculptures and installation work, thereby creating a kind of interdisciplinary dialogue. For the occasion of this first multimedia exhibition, a photography book bringing together ten years of the artist’s work has been published by Spector Books (Leipzig). The same publishing house released a book of the artist’s drawings earlier this year.

The CPG had already presented the Ofenpass 2012 Project as part of the fALSEfAKES Exhibition in 2013, in the form of unique prints measuring 205 x 170 cm. The current exhibition Superficial Projects provides the opportunity to present a project begun three years ago, by printing 5,000 copies of a photograph taken by Peter Tillessen, sold to the public at cost price (5 francs), and depicting the same landscape shown in Andreas Gursky’s Ofenpass photograph from 1994. The latter was sold at an auction price 100, 000 times higher than the price offered here, and with only 6 copies printed. Andreas Gursky is the highest selling living photographer on the art market: some of his work has sold at over 4 million francs.

Sold in collaboration with the shopping centre MParc La Praille Migros, who are selling 1,000 copies, Tillessen’s photograph was taken in similar conditions to those of Gursky’s. The image shares the same focal distance and the same lighting; it was taken at the same time of day and the same season as its predecessor, and respects the same composition. With Ofenpass 2012, Peter Tillessen raises the question of ownership: who does a landscape belong to, or more importantly the representation of a landscape. In his artistic endeavour, Tillessen produces a photographic (and democratic) utopia: the artist’s unlimited edition print is on sale at a price that is affordable to everyone, in contrast to the art market whose prohibitive prices make art available only to a rare few. 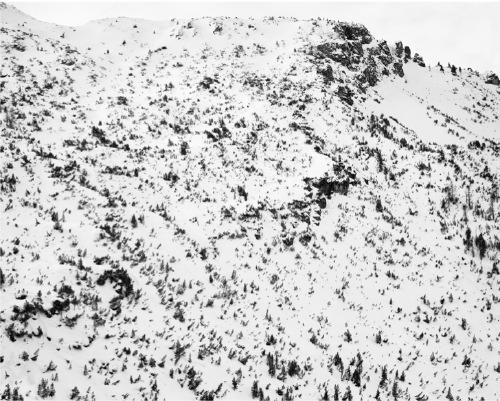